During the ‚ÄúGlobal Grad Show 2019,‚ÄĚ a four-day exhibition and public programme that took place in Dubai, the contemporary designer was perceived to function as lubricant in a team rather than a lone genius. The line-up of selected works and speakers from around the world addressed‚ÄĒsome more accessible than others‚ÄĒthe way in which ‚Äúreal world problems‚ÄĚ are part of the educational curriculum. As Professor Naren Barfield (Deputy Vice-chancellor and provost of The Royal College of Art) and Brendan McGetrick (Creative Director of the Dubai Future Foundation) put it during their talk1 in the public programme, ' ... we now need to have at least five careers in our lives to stay relevant and active. How do you educate yourself for circumstances and systems for which formal guidelines do not yet exist?'

The exhibition showed the ‚Äúoutput‚ÄĚ of graduates from 105 international art and design academies and universities. Work was shown in a fair-like structure that staged objects, interfaces, models of buildings, and urban infrastructures. In the selection of work, curator Eleanor Watson focused on the question of human values, and how these play out within the vast technological systems that shape daily life. Watson argues that the current, universal sense of precarity may help humanity foster the compassion and desire for equality that it is capable of. The outcome for the show is a general inventory of projects that functions as a library of sorts, where substance is found in the intersection between the meeting of graduates from around the world, the organized excursions, and the programme of talks.

Public Sandberg (PS) was invited to the ‚ÄúGlobal Grad Show 2019‚ÄĚ to nominate work from the 2019 graduates of the Sandberg Instituut. The project Citizen Riot Shield, by design duo Herbert Luciole (Laetitia Migliore and Barnaby Monk), graduate of Sandberg‚Äôs Temporary Programme, Radical Cut Up, was selected to be part of the exhibition. The project is exemplary of speculative design made applicable to urgent societal issues, a work that is concerned with intervening, adding to, or repurposing collective activities like negotiating, striking, and protesting.

All places have rules, be it the football field, the theatre, the museum, the city, the village, the school, or the kitchen table. People organize their lives in accordance with planned traditions and habits, such as giving applause after a performance, or not touching artworks in an exhibition. Striking is no exception. A strike has rules and conducts that determine the striker‚Äôs behavior. Laetitia Migliore and Barnaby Monk share a household and practice from which they explore and develop a variety of tools for a postcapitalist transition, central to which, is the act of striking. They put a new aesthetic lens on activist movements that involve public disobedience. Inspired by the likes of 360.org, Extinction Rebellion, and Wikipedia as evidence of humanity engaging in huge networked collaborative endeavors, the overarching goal of Tools for a Postcapitalist Society is to demonstrate that the terrain of protest, activism, and collaboration is fertile ground for art, design, and technology. In so doing, the duo ask the question: how can your personal skill set be re-purposed as a tool for protest, contributing to the transition into a postcapitalist society? ‚ÄúThe Global Grad Show‚ÄĚ provided a platform for the duo to convey a more extensive understanding of protests and protesters to a larger international audience.

The duo presented a collection of their repurposed their Citizen Riot Shield's at the show, which consistently, and self-reflexively, acknowledge their complicity in the surrounding systems of control. Herbert Luciole believe that participation in today‚Äôs society does not disqualify them from trying to change it. They state that capitalism and the ‚Äúfree market‚ÄĚ is the illusion of choice that masks a preordained social order. System change is their chosen solution and mass participation is the way to bring this change about. The duo use skills, experience, and materials from their commercial practices as production designers, film directors, and prototypers in order to ask the question: how do we turn the gaze of technology back onto the institutions of power? 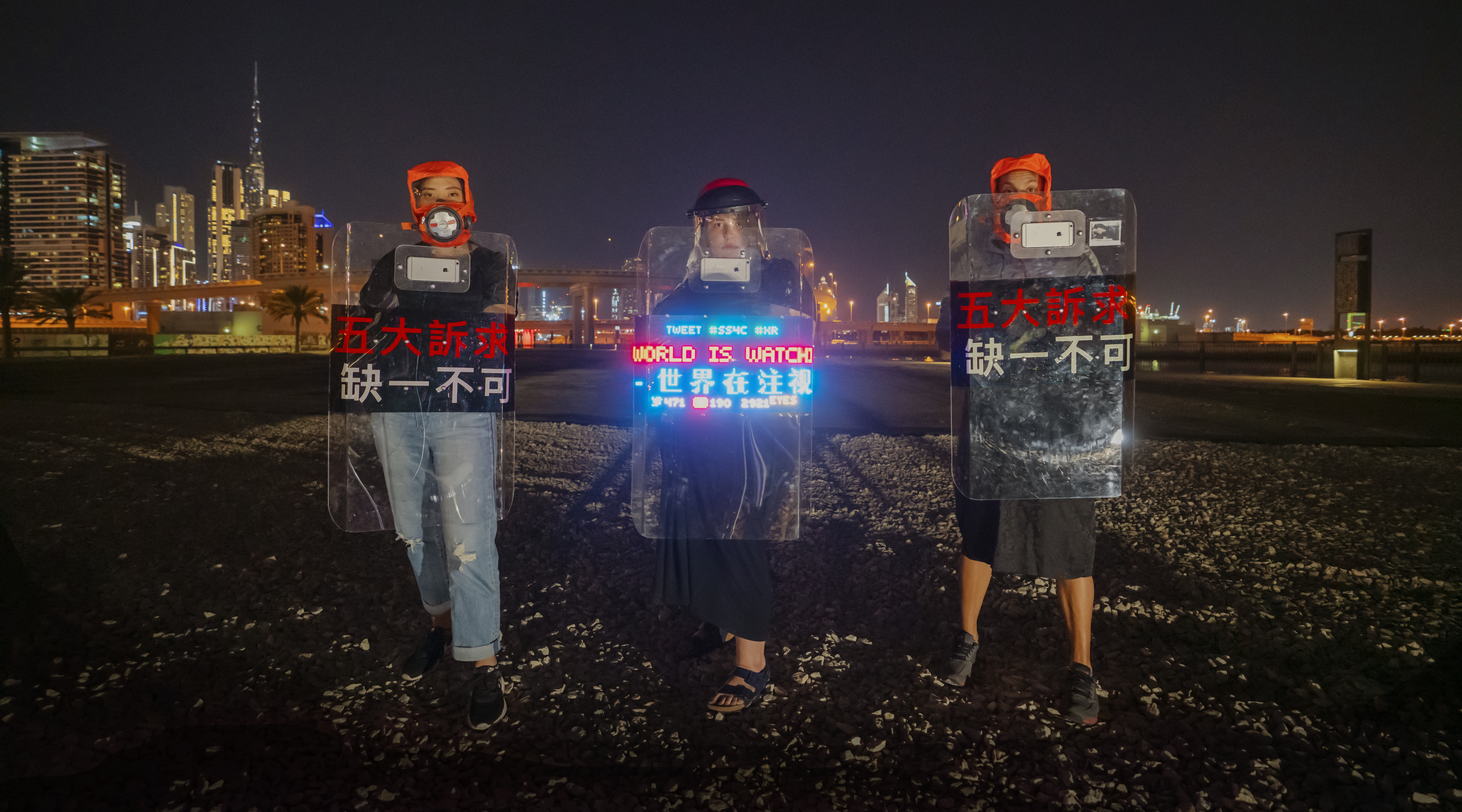 The words of author Douglas Rushkoff resonate in Herbert Luciole‚Äôs work: ‚ÄúWe are at a crossroads, it‚Äôs time to pick a team‚ÄĒjoin Team Human. Find the others.‚ÄĚ1 Parallel to the exhibit the duo made use of the given circumstances to develop a series of new images and videos of their work, in support of the Hong Kong protests at the time, by sourcing supporting actors‚ÄĒother graduates in the show‚ÄĒand taking the riot shield out of the exhibition context into Dubai.

About the author
PS (Public Sandberg) develops publications and exhibitions based on the phenomena, topics, people and activities at the Sandberg Instituut. In collaboration with the various Main Departments and Temporary Programmes, as well as visiting guest writers and image makers, PS aims to manifest, portray and review the Dutch learning institute for fine arts, design and interior architecture.

The Discourse of Others

Can her voice crack? I am not sure I understand | Ventriloquised by Neoliberalism

Everything You Want to Hear

Somebody Else is on the Moon

Intimate and Subtle | MAD is aggressively modest and modestly aggressive

Material Utopias | The Experimental Process as a Catalyst for Innovation

Do You See the Signal?